Yeair (pronounced like “year”) is a new quadcopter that’s different from what you’ve seen in the past – it isn’t powered by an electrical motor and battery system. Instead, it uses multiple two-stroke combustion engines, similar to what some dirt bikes use. Now this obviously is dramaticly different from the drones you’re used to, so lets look at the pros and cons of the combustion engine drone. If you want to back them or track the status of their Kickstarter, click here. 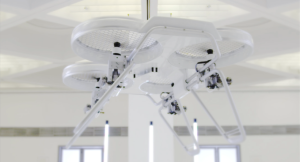 The main advantage of the combustion engine system in Yeair is the increased flight time. The Yeair can remain in air for up to 60 minutes! Compare this to an electric quadcopter like the DJI Phantom 3, that’s nearly 3x longer than the Phantom’s 23 minute flight time.

The Yeair’s combustion engines also allow for greater power, which can be seen by the max payload it can handle of 5 kilograms. The Yeair can also fly at speeds of up to 62 miles per hour! Most electric quadcopters max out at around 37 MPH.

Another interesting feature of this quadcopter is a long-range wing adapter that will be available for it, extending the flight range by up to 30%. 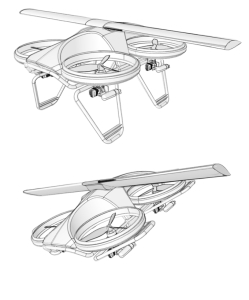 Although the Yeair is extremely powerful, there comes some drawbacks. The first, is mixing fuel. Unlike your automobiles four-stroke engine, you can’t just poor gasoline into the gas tank for this quadcopter. You need to mix gasoline and oil at a 25:1 ratio in order for it to function properly, so there’s a bit more work than just swapping out a battery.

The Yeair is also much heavier than its electric counterparts. The Yeair weighs 4.9 kilograms, a quadcopter like the Phantom 3 only weighs 1.3 kilograms.

A combustion engine is also going to be noisy. Electric drones are nearly silent while in flight, but a combustion engine needs to burn fuel which is going to make a lot of noise. This could make the Yeair less desirable to fly in nature.

Finally, some people may avoid purchasing a Yeair drone due to the reliance on fossil fuels. While Yeair claims to be the “next generation” of quadcopters, it’s not a very “green friendly” solution to the advancement of quadcopters.

What do you think about a combustion engine drone? Let us know below!