A new start-up founded just over 6 months ago is already making headlines in the fast-moving drone scene. Perceptiv Labs has announced they’re now taking pre-orders for their new drone technology, Shift. Shift is a hardware add-on to your drone that syncs with a companion app, and allows your camera to track a set object (or objects) automatically.

Shift doesn’t do all the work (and take away all the fun!) – You still pilot the drone, but the Shift gives you smooth, uninterrupted tracking of your subject (or subjects) by adjusting the camera as needed. The results are fluid, professional looking tracking shots on an amateur-friendly budget.

The Shift has a built-in battery system, so it won’t kill your flight time, and it weighs less than 200 grams (.44 pounds). It supports an FPV video link to the app, and works alongside an RC controller.

Currently we know of a few in-flight camera control features programmed into the app interface. You have the ability to select which objects or people to track in the frame, and you can track at least two at a time. You can also have the drone circle or corkscrew around a subject, all while beautifully tracking it and keeping the camera framed nicely. 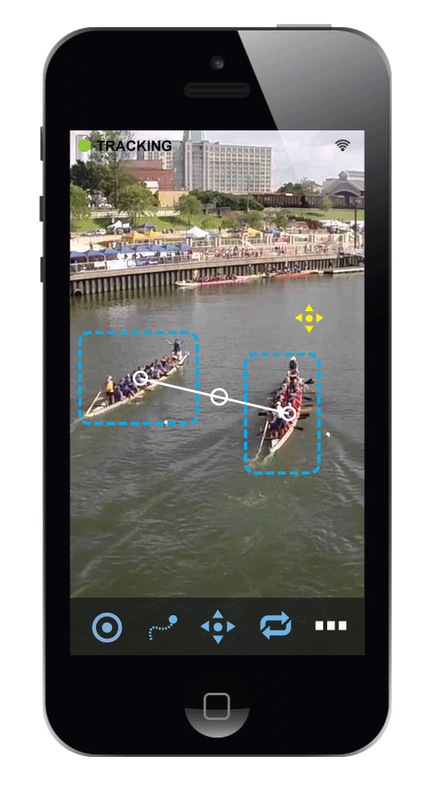 Another nice feature is the ability to pan or tilt the camera right from the app’s interface. Even cooler though is the ability to zoom into your subject which automatically flies your drone closer. I can just imagine all the great uses for such a dramatic shot and can’t wait to see what people come up with.

The Shift will work with many of the most popular drones used for film making, including DJI Phantom 3 and the 3DR Iris and X8. The CEO has said Shift should be compatible with any drone camera, and the H3 gimbal with more supported hardware coming soon.