The Q4 Nano quadcopter from Hubsan owns the title of the world’s smallest quadcopter. Its tiny size is not its only unique characteristic, though. Instead, it combines this size with the ability to deliver huge amounts of fun and a number of appealing features and some practical accessories. This tiny quadcopter is fast, responsive, stable, and durable, providing a fun indoor flying experience for new and experienced drone fliers alike.

The Q4’s specs do not replace a hands-on experience with this tiny flying machine. However, they do provide a glimpse into the power, speed, and durability that characterize this remote-controlled machine. Following are a few of its most important specs: 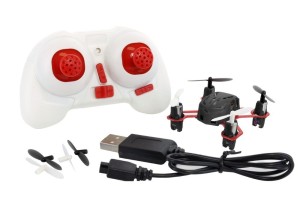 The Hubsan Q4 is an incredibly tiny mini quadcopter. About the size of a quarter, this flying machine offers an experience that reviewers frequently describe as incredibly fun. The quadcopter is a delightful mini flying machine that displays is both agile and fast. Reviewers note being pleasantly surprised by its speed and responsiveness, which makes its antics in the air even more entertaining. These antics include 360° eversion, which allows it to flip all the way around, in any direction, while its tiny size and consequently light weight allow it to more quickly and easily perform these tricks.

In addition to speed and agility, the Q4 possesses a durability that belies its small size. Reviewers report that even when it crashes, it tends to recover with no damage. An added feature is the ability of the propellers to come off in the event of a crash. This feature protects the propellers from damage during the crash. The flier need only reattach them to the copter and return to enjoying their Q4.

The Q4 is also incredibly stable, sporting a 6-axis gyro that gives it the ability to resist blowing around, despite its small size. Reviewers also report that despite its light weight, speed, and agility, it is easy to control. They also support Hubsan’s claims to the Q4’s stability, reporting that it does not wobble during flight.

While not intended for use by children, the Q4’s durability and agility provide a high degree of entertainment for any drone enthusiast, from beginners to more experienced drone fliers. In fact, a number of practiced drone fliers report being delighted and pleasantly surprised by the power and agility of this little quadcopter. As a result, the Q4 earns a spot as an enjoyable and valuable addition to any drone flier’s collection.

The Q4 also comes with a number of extra features that add to its ease of use and to the amount of fun it delivers. The quadcopter sports bright LED lights that make it easy to find in the dark. In addition, it comes with a rechargeable lithium-ion battery that completely charges in about a half an hour. The battery can be easily charged in a computer with the use of the included USB charger cord. Out of that half-hour’s worth of charge, reviewers report getting an impressive 20 minutes of flying time that far exceeds Hubsan’s reported flying time of about 5 minutes. Accessories included with the quad copter include a battery, USB charging cable, and an extra set of propeller blades to give you everything you need to begin enjoying your quadcopter right away. All that is needed to get going is to load the remote with AA batteries and calibrate it according to the included instruction manual.

Once the Q4 is set up to fly, it provides hours of entertainment and fun. Its speed, agility, durability, tiny size, and convenient accessories make it an appealing quadcopter to enjoy on your own or with a group of friends. The result is a tiny quadcopter that packs far more fun and power than you would expect and makes the ideal way to entertain friends and family.