GoPro and DJI are two companies that started out with a symbiotic relationship. GoPro makes the best action cameras on the market. Founded back in 2002, they’ve built up a loyal and strong following – so strong that they now do nearly $1 billion in revenue and are valued at over $7 billion. While GoPro cameras gathered popularity from their use in extreme sports, they also gained a lot of attention for what they captured from the sky attached to a DJI Phantom. DJI even sold camera mounts for their original Phantom’s specifically for a GoPro camera.

DJI perhaps gained even more than GoPro did from this relationship. For many, just flying a quadcopter around wasn’t worth the investment of hundreds of dollars. If that was their goal, there were plenty of cheaper quadcopter on the market that could be just as fun. What those cheap quadcopters couldn’t do, was safely support a GoPro and capture amazing images during flight.

This led to people buying Phantom’s to attach their GoPro to. These people created amazing videos, which inspired thousands more people to buy Phantoms. These new Phantom owners bought GoPro’s to make amazing videos, and you can see how both companies grew rich together. See one of such early videos below shot with a GoPro and DJI Phantom back in 2013, the year the Phantom was released. 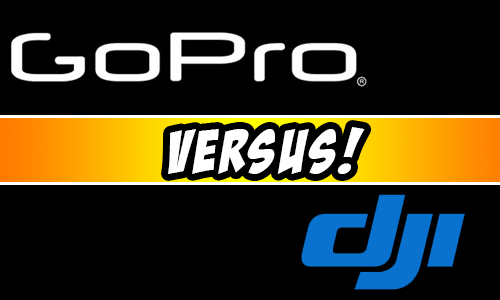 As we’re halfway through 2015, these companies have matured past the startup phase. Sales for both GoPro and DJI are projected to be $1 billion this year, which has both companies thinking about the future and just how close they might be to market saturation – a term that means mostly everyone who has a GoPro or drone will have one, and sales will decline. One solution to help stem away from this potential decline in revenue is to increase their product offerings – which in this case means cannibalize each others markets.

When DJI announced the Phantom 3 this year, something was different from their past two iterations – no mention of GoPro cameras. With the Phantom 2, DJI had bundles that came with GoPro cameras. Not so, for the Phantom 3. Instead, the drones come bundled with unbranded (or DJI brand) cameras which are quite phenomenal, as you can see in the footage below shot with a Phantom 3. Not only does DJI not sell GoPro’s with their Phantom 3’s, but they also don’t offer the quadcopter without one of their own cameras bundled – meaning someone would be required to buy their camera even if they would rather use a GoPro.

It was recently revealed that GoPro will now get into the consumer drone business, a radical shift for the camera makers. While details are scarce thus far about just what type of drone they’re working on, we can safely assume it will look to eat away at some of DJI’s market share. GoPro will likely aim for something that emphasizes ease-of-use for filming extreme sports, whereas DJI will continue to focus on those who want the most control over film making.

While we can’t be certain what the future holds for these two tech giants, we can be sure that they’ll push each other to deliver greater products and the consumers will ultimately end up winning. Be sure to check back as more details get uncovered.