DJI has just announced the successor to their popular Phantom line of quadcopters, the Phantom 3. Boasting a slew of new features, DJI says the Phantom 3 will be a ground-breaking advancement for the industry. It’s clear DJI put a lot of focus into making filming the best experience possible for pilots. Check out the feature list below to see how they’re doing it.

The Phantom 3 will feature two distinct models – Phantom 3 Professional, which features a 12 megapixel camera that shoots at 4K, and Phantom 3 Advanced, which has a 12 megapixel camera that shoots 1080p. Both models come with a 3-axis gimble, making it ready to capture stable video right out of the box. The quadcopter cameras are higher quality than the cameras used in the Phantom 2 Vision+, and are more sensitive to light.

DJI has made some welcome improvement to the drone controller, giving you a 720p video feed from the Phantom 3 to a connected device in near real-time, at distances of up to 1 mile away from the quadcopter.

You can check out a hype video below to view some great footage shot from a Phantom 3, as well as getting a peak at the controller.

The Phantom 3 has many software upgrades to help make flight as easy as possible. This includes one-touch take off and landing, faster GPS signals, and a number of other technical flight upgrades you’ll need to check out for yourself.

The new Phantom 3 controller is just as interesting as the new quadcopter itself. Featuring a 2km range (1.2 miles),  you can control every aspect of your flights and camera in a compact, easy to use remote control. It even has two customizable buttons for you to map to whatever function you find useful! 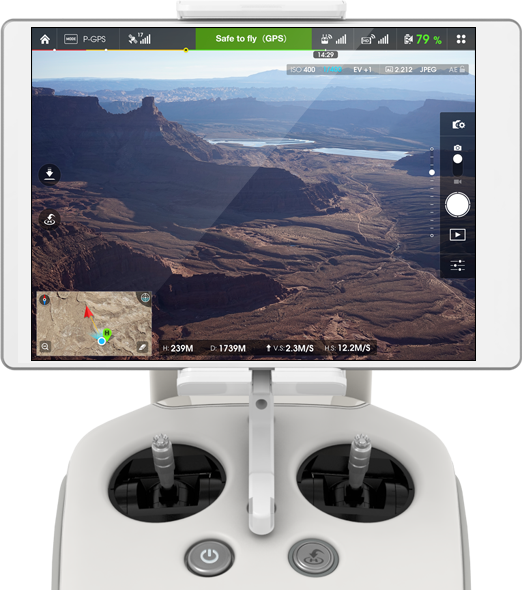 DJI says the Phantom 3 batteries store more energy and output more power, and report the charge status in real-time. The new battery charger is also said to recharge battery packs faster, but DJI hasn’t yet announced flight times or recharge times on the new batteries. In the event of dangerously low battery levels (or a lost connection to the controller), the Phantom 3 will return to the location it lifted off from.

Phantom 3’s will have a new “vision positioning” feature, which will use visual and ultrasonic sensors to get a read on its position and stay put. This is useful in areas where you can’t get a GPS signal.

Order the Phantom 3 from Amazon