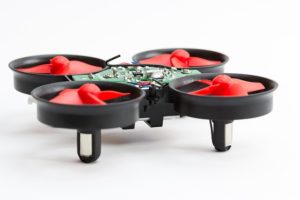 Is it a bird? Is it a plane? No, it’s a mini-drone, and if you don’t have one already, chances are you’ll want one soon. Mini drones or micro drones have been on the gift list of many a kid (and their dad’s) for the last year or two, and it’s easy to see why. They’re small in size, but heaps of fun to fly and can go pretty much anywhere. Also, they can be used outside as well as indoors, and are a lot more affordable than you think.

It’s easy to get caught up in the hype of the state-of-the-art drones that sell for hundreds and thousands of dollars, but we’re going to share a little secret with you. You don’t need to. Yes, they’re cool and drool-worthy, but the latest mini-drones are as much fun, and won’t leave you with an extreme case of post-purchase dissonance.

What is a Mini Drone

A mini-drone is exactly that, a drone that’s miniature in size. Nano drones, for example, are roughly the size of your whole hand, while a mini-drone fits quite comfortably in your palm. Because they’re relatively affordable and slightly more crash-proof, most people learn to operate one of these before they move onto the bigger (more expensive) models.

Unfortunately, they don’t have all the features you’ll find on the bigger drones and quadcopters, but if you’re new to the world of drones, mini-drones are a great starting point. But let’s get to the important question – how much is a mini-drone? The good news is you’re not going to need a second mortgage for a mini-drone, just a piggy bank. Most mini-drones cost less than $100, but if you’re happy with a basic model, you can expect to pay $50 and under. (spoiler alert: our top 5 are all under $50.)

Basic Features of a Mini Drone

There are a few basic features you can expect to find on mini-drones, including:

There are loads of budget-friendly mini-drones available, but we’ve hand picked five, of what we think are the best in terms of features and affordability.

The Holy Stone HS190 foldable mini-drone is pretty cool in that the arms fold and fit inside the controller, that doubles up as a carry case. Taking off and landing is easy, with a simple push of a button, and it has altitude hold, which means you can let go of the throttle and the drone will hover at the height it’s at. This is a nifty feature for beginners that might be a little nervous operating it.

Also, the HS190 has a headless mode that allows you to fly the drone in any direction, and it has a return pilot function, which means it’ll automatically fly back to you. The drone has 6-axis gyros that make it more stable, and you’ll have a blast performing a whole lot of flips. It can also do 360° turns. The Holy Stone 190 foldable mini-drone has a flight range of approximately 50 meters, and you’ll get around five minutes operating time.

This is a great mini-drone that costs a lot less than you’d expect. We suggest you give it a go.

It floats like a drone and looks like a bee! The Holy Stone HS150 Bolt Bee measures around 5 inches and is super fast. Perfect for beginners or even savvy racers, it is also easy to maneuver. The HS150 is jam-packed with user-friendly features, including headless mode as well as altitude mode. The Bolt Bee is built for speed and can reach up to 31 mph, which isn’t bad at all, considering the price and the size. It can do 4-way flips, including forward, backward, left and right, and perfect 3D rolling.

It’s great for indoors, especially for zipping in and around tight spaces. If you’re looking for an affordable racing drone, your search is over.

The Potensic A20 Mini-Drone is extremely budget and user-friendly. It works in headless mode, and also has the altitude hold function. The one-key landing and taking off button means even a first-time user will be able to get it off the ground, and keep it flying. You get around 15 minutes flying time out of this mini-drone, and it comes with a low battery alarm that reminds you to fly it back before it dies completely. It also has an out of range alarm too that alerts you when it’s exceeding its flight range.

The drone itself is pretty basic, but when you look at the price, durability, and usability, you can’t go wrong.

Another mini-drone that’s perfect for kids and novices is the sykii RC Mini Drone H36. It offers all the features you’d expect to find in more expensive models, like headless mode, one-key return, and 6-axis Gyro Stability System plus a whole lot more.

It has a 360°protective frame design for all four of the propellers that not only makes it safe for little fingers, it also makes it more durable. You can do flips and tricks, as well as 360° rolls. It even comes with a memory function. LED lights allow you to fly (and track) at night and the 2.4 GHz anti-interference gives you precision control.

Mini drones are becoming more popular, and there’s a good chance you’re going to be buying one soon. Most have similar features, as we’ve already mentioned. However, there are a few factors to keep in mind when deciding on one.

Flight time refers to how long you can fly it on one charge. Obviously the longer, the better but in most cases, mini-drones have between seven and nine minutes.

Speed is how fast your mini-drone can fly. Some can reach up to 31 mph.

When we talk about the range, we mean the distance it can fly before it loses contact (and control) with the transmitter.

A lot of the newer mini-drones have onboard cameras to take photos or shoot videos. While the quality isn’t as good as the more expensive quadcopters, they’re still fun to have.

The transmitter is what you use to fly your mini-drone. You can get a remote control app or a hardware transmitter.

This is a great feature to have, whether your flying skills aren’t particularly good, or you’re nervous about losing your drone. It automatically sends the drone back to where you are, using GPS.

3 Handy Tips to Remember when Buying a Mini Drone

How to Fly a Mini Drone like a Pro

You’ve read our guide, chosen one of our recommended drones, and now you’re ready to take to the sky. We’ve got a few bonus tips on how to fly your mini-drone like a pro. Carry on reading to find out more.

If you’re flying your drone for the first time, it’s a good idea to try it out in automatic mode first. If it has the functionality, turn on the auto flying features like return home and stabilization until you get a feel for it. Once you have the hang of it and have a better idea of how it flies you can then switch over to manual flight mode.

Most mini-drones don’t fly well in windy conditions, which is why you need to keep an eye on the weather. While some, like the Holy Stone HS150 Bolt Bee Mini Racing Drone, can fly when the wind’s blowing because of its speed, others won’t fare as well. Make sure you know what your drone can handle.

If you want to learn a few tricks, start with tight curves and flying wide, upward corkscrews, and hovering. Not only are these fun, but they’ll also teach you the necessary skills when you move onto bigger drones. A lot of the mini drones let you do 360° flips as well, and you can set up some cool obstacles indoors. There’s no shortage of things to do as you get more confident.

“I’ve never crashed my drone!” said no one ever. Flying a drone means crashing one, but if you know what you’re doing, you can minimize the damage and get to enjoy your flying machine for another day. First things first, don’t panic. If you can, try to steer your drone away from trees or other major obstacles. Retrieving a drone in an open field is a whole lot easier than scaling a small forest.

Before it’s about to hit the ground, try to cut the throttle, so the blades stop spinning. This will prevent them getting more damaged, and it won’t cause as much damage to the object you’re crashing into.

Don’t ever underestimate the importance of hovering. Whether you’re taking off, preventing a crash or landing your drone, knowing how to hover is essential. Also, if you’re taking photos or capturing footage on video, being able to hover will eliminate the shakes. Practice as close to the ground as possible and gradually move higher. If you can, also try it out when there’s a bit more wind. Soon you’ll be hovering like a pro.

In the past, drones were for people who had too much time and money on their hands, but they’ve become far more affordable and can be used for quite a few things. Don’t get us wrong. We don’t feel like we need to justify why everyone needs at least one drone in their lives, but if you need a reason or two here goes:

It goes without saying we’re huge fans of drones in all their shapes and sizes, but our passion for these wonderful flying machines was ignited by the humble mini-drone. They’re affordable, easy to operate and loads of fun. For less than $50 you get to experience a whole new world, and who knows, if the bug bites, you could turn your love of drones into more than just a hobby.